Featured in Newsweek’s Top 10 Trial Lawyers, The Reeves Law Group is a professional law firm that has been helping bus accident victims in Los Angeles and throughout Southern California for over 35 years. We have recovered over $250,000,000 for our clients.

Contact our law firm today for a free consultation with an experienced Los Angeles bus accident lawyer to determine if you have a personal injury claim for financial recovery.

Why Hire The Reeves Law Group for Your Bus Accident Claim?

When you take public transportation and step onto a city transit bus or put your child onto a school bus, you entrust the bus driver, the bus company, and a host of others with you and your loved ones’ safety and security. An accident is among the last things you expect. Yet, accidents happen.

When a serious bus accident occurs, the consequences can be significant, both emotionally and financially, not only for the bus passengers on board but also for their dependents and loved ones.

Our legal system has a process in place to ensure that those at fault are responsible for the costs of bus accidents and not the innocent passengers and their families.

An injury that occurs while an individual is using bus transportation may entitle that injured person and/or his dependents and family members to compensation from a private bus company.

An effective personal injury attorney can help you maximize your recovery from the responsible parties even if it means filing a bus accident lawsuit to get the maximum compensation you deserve.

What to Do When an Accident Happens

First, make sure that you and any of your loved ones receive prompt medical attention. Because buses are commercial carriers, their personnel will generally call for medical help for any injured passengers who might need it. Bus accident victims should insist on a full medical evaluation of injuries, including tests for head, back, and spinal injuries.

Next – and as soon as possible – contact a reputable attorney with expertise in handling Los Angeles bus accident cases. There are many regulations that are specific to common carriers, such as bus companies and government transit lines, and experienced bus accident attorneys will be able to determine how they apply to your case. Also, statutes of limitations restrict the amount of time you have to file a claim after a crash, particularly if a government entity is involved. Government entities usually have shorter terms within which to file a bus accident claim. You should only entrust your case to a bus accident attorney who has the experience and proven results in similar cases, to ensure that your case is handled competently and that the filing deadlines in your case are protected.

What Kinds of Compensation Are Recoverable?

Depending on the nature of your or your family member’s bus accident injuries, your lawyer may identify possible claims for:

Experienced Los Angeles bus accident lawyers can help you determine the types of damages to which you may be entitled. The extent of those damages will depend on the circumstances of the accident. In instances where multiple parties bear responsibility for the bus crash, monetary damages will need to be apportioned.

Calculation of damages depends on factors such as the claimant’s injuries, current earnings and impairment of future earning capacity, marital status and dependents, the nature and extent of the injuries, and the amounts of past, present, and future medical treatment cost.

If a bus accident resulted in a fatality, family members of the deceased may be able to pursue a wrongful death lawsuit. It is in your best interests to contact competent bus crash attorneys for assistance in determining your potential bases for recovery.

What Qualifies as a Bus for Purposes of a Bus Accident?

The Federal Motor Vehicle Safety Standards define a bus as any motorized vehicle capable of carrying more than 10 passengers. The category includes charter buses, school buses, large vans used for public transport, church buses, municipal transit buses, many airport shuttles, tour buses, trolleys, and intercity buses, such as Greyhound buses. Most of these are considered “common carriers” under the law and are therefore subject to state and federal licensing requirements and other regulations, but it is state law that will determine if bus companies and others are liable for compensating a bus passenger for injuries sustained in a crash.

Greyhound buses, tour buses, and other commercial providers carry thousands of passengers every day, often on long-haul interstate trips. Accidents and crashes occur for many reasons, including driver fatigue, careless driving, negligence on the part of other drivers, dangerous road conditions, poor mechanical maintenance, and defectively designed or manufactured parts.

Another factor that may lead to bus accidents is criminal activity, such as an assault by a passenger on the driver. According to Greyhound’s own records, between October 3, 1997, and October 3, 2001, there were 42 incidents in which Greyhound passengers assaulted or attempted to assault the bus driver, or grabbed or attempted to grab the driver, the steering wheel, or the brakes while the bus was moving. The bus service operator may be liable for damages caused by criminal activity if the criminal activity could have been foreseen and avoided.

Many of these types of buses do not have lap or shoulder belts to protect occupants from being thrown around the interior of the bus or ejected in the event of a crash. While the driver’s seats in these vehicles must by law have personal restraint systems, the passengers may not be so fortunate, because the federal government does not require passenger seat belts. The government’s reasoning is that installing them would cost the vehicle manufacturers and bus companies money that, so far, the government believes they ought not to be compelled to spend.

Because of the lack of a mandate to install seat restraints, when a tour bus or a Greyhound bus crashes, riders are at a greater risk of being seriously injured or killed than would be the case if seat restraints were required. Although federal law does not require these types of vehicles to have seat belts for passengers, it is important for your attorney to know that some courts across the nation have nevertheless allowed suits to proceed against those responsible for deciding not to install them.

It is important that the Los Angeles bus accident lawyer you hire is experienced and capable of navigating the state and federal laws and regulations governing all types of bus service providers, and that your attorney can determine if a violation of those laws caused your accident or made your injuries or other damages worse. It is very important for a lawyer handling a bus accident case to ensure that all potential sources of compensation are pursued, whether the fault lies with the bus’s manufacturer, the bus company that hired an unqualified mechanic, or the driver of the tractor-trailer that rear-ended the bus.

It is also important for bus accident lawyers to retain investigators and well-respected experts to investigate the causes of your crash. If it appears that your accident may have been caused by a dangerous road condition, your attorney will need to hire expert civil and traffic engineers to pinpoint those road deficiencies. Competent and reliable lawyers will invest the necessary resources and efforts to ensure that your case is resolved for its maximum value. Such attorneys will hire the necessary investigators and experts, visit the location of the bus crash, take images of the scene, conduct tests where necessary, find and interview witnesses and investigate prior complaints or claims that have been made against the responsible parties, and deal with the insurance company.

Who May Be Responsible for Your Injuries?

Because of the many ways bus accidents can happen, the question of who is responsible for injuries and other damages depends upon the circumstances of the accident. Early in the case, it is important for your bus accident attorney to identify certain parties, such as the bus owner, the company that operates it, and the company responsible for making repairs and maintaining the bus in a safe mechanical condition.

Finding an attorney who will locate all potentially responsible parties is crucial. Some of those your lawyer may identify as parties responsible for your injuries include:

– A bus accident may occur because the bus company sends a defective bus out on the road with faulty brakes, a shaky steering column, or overused tires. The company’s actions in hiring unqualified drivers, maintenance people, and other personnel, or in negligently training or supervising them may also contribute to the cause of an accident. In addition, the company may be found at fault for a bus crash and passenger injuries caused by its failure to make or enforce adequate safety procedures.

To moderate the risk of accidental injury in the above circumstances, the State of California requires bus drivers to adhere to a list of precautions. These include activating flashing lights when stopping to pick up students and assisting them in crossing roads.

Where your lawyer can establish negligence or carelessness on the part of the bus driver when one of these types of bus accidents happens, such injuries could subject the bus companies and school boards to liability and damages.

In each of the years from 1990 to 2001, there were between 50,000 and 63,000 bus accidents in the United States, including accidents involving school, transit, and intercity buses. Although the number of buses involved in fatal crashes in these accidents is relatively low (from 3 to 21 per year, between 1991 and 2004), the number of injuries is much higher: generally somewhere between 15,000 and 21,000. 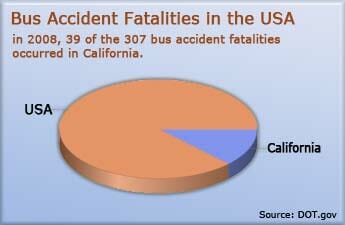 The Reeves Law Group’s attorneys have a long history of success in personal injury cases helping accident victims suffering from serious injuries. Our lawyers have procured significant results for thousands of satisfied clients. Many accident claims must be filed within a specific period of time. Claims involving buses owned by government entities and school boards have shorter filing deadlines. Acting promptly to retain one of our accident attorneys is therefore essential for protecting your rights.